BlastPoint’s September Map of the Month explores key demographic characteristics in one urban area that could explain the rebirth of indie book stores nationwide.

Ahh, September. The kids are back in school, grownups are wondering what great books we’ll snuggle up with as the weather cools, and we can still see UNESCO’s International Day of Literacy in our rearview mirror. (It was September 8th, in case you missed it!)

In honor of all that, and because the BlastPoint team happens to be a bunch of bibliophiles, we decided to explore a phenomenon we’ve been noticing for the past several years: the rebirth of indie bookstores. There are five within two miles of our East Liberty office, and they appear to be doing a booming business, even in the age of Amazon.

What we know for sure is that Pittsburgh has always had a vibrant literary history, with Andrew Carnegie, robber baron that he was, establishing some of the first libraries in the country, which continue to flourish today, and numerous local shops that are currently thriving (read more about them in this Very Local story).

But that surely doesn’t explain why indie bookstores are experiencing a revival in, among other places, Minneapolis, Denver and San Diego, too.

Maybe this is why the investment firm that recently bought Barnes and Noble plans to rebrand the corporate chain to operate “more like a constellation of independent stores,” according to the New York Times. Ironic that the company criticized for putting independent bookstores out of business in the 1990s is now copying their strategy!

On a local level, we wondered what kinds of neighborhood characteristics are supporting the success of indie bookshops. So we consulted BlastPoint’s Maps tool and dug into some demographics, looking to illuminate a possible explanation. 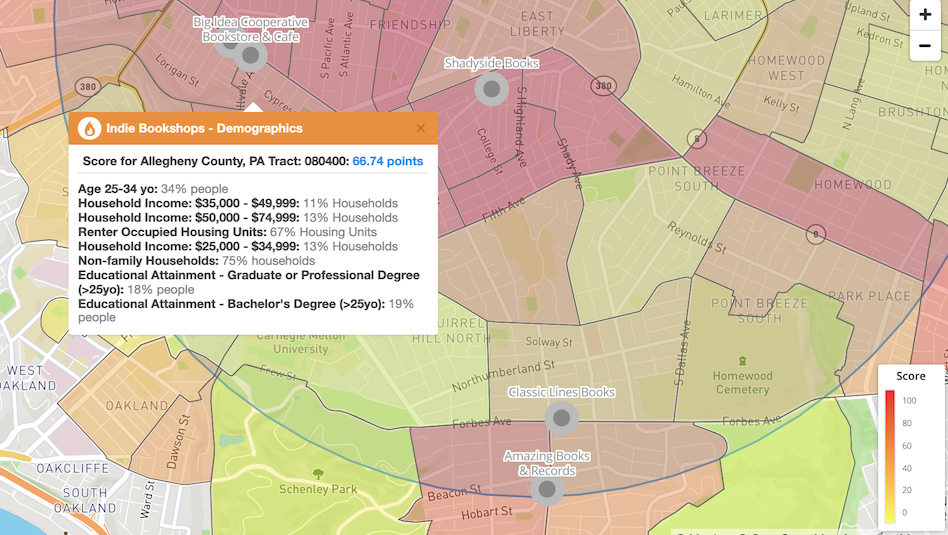 Utilizing our Maps tool, we created a 2-mile radius around the BlastPoint office and placed pins for each of the independent bookstores in this area: Amazing Books & Records, Classic Lines Books, Shadyside Books, White Whale Bookstore, and Big Idea Cooperative Bookstore & Cafe. We then created heatmaps to determine demographic factors such as income, age, education, living situation, and race within the 2-mile radius.

“I divided the heatmaps into census tracts instead of ZIP codes,” explains Marianne Holohan, BlastPoint’s Communications Manager, who led our research, “because nearby neighborhoods like Squirrel Hill are pretty massive and contain several smaller areas with fairly different demographics.”

What we found were some key common characteristics in the bookstores’ census tracts:

In short, our data suggests that single, white, educated Millennials are the prime demographic supporting the rebirth of indie bookstores in the East End of Pittsburgh. Our data provides deeper insight into what Fortune and Publishing Perspectives consider a national trend.

If you’re wondering whether the same characteristics hold true for your region, or if you’re considering opening a retail location but not sure where to go, contact BlastPoint to schedule a demo today. Our tool is helping retailers across the country save money and find the right customers through targeted location analytics.

And don’t forget to pay a visit to your local independent bookstore!